THE REAL STORY OF THE 7.5 FK FIELD PISTOL 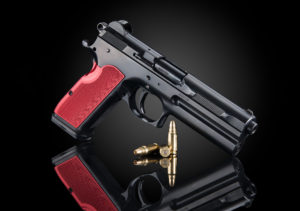 The 7.5 FK development was started initially to meet a requirement by a private security company that was operating in the Middle East.

The problem they were facing was that most firefights were taking place between 50-150 meters and a lot of the times it was out of vehicles and or in urban areas. Most, if not all the available weapons were designed to operate at either much shorter or much longer distances. Basically, the available options were 9mm para/ 45 ACP pistol and 5.56 M16/M4 rifle. The terminal effect of these weapons was rather limited as actually observed in real combat situations. They have subsequently been proven in multiple wound analysis studies from thousands of injuries that occurred in that theater.

In addition, the ideas of kinetic energy charts, tumbling bullet theories, hydrostatic shock theories, temporary wound cavity theory and not to mention the “effective range” theory were all put to final rest and buried. They are simply not correct. As it turns out combatants are usually more physically capable and mentally determined to fight and withstand projectile hits from firearms than had been assumed before.

The soldiers needed a second weapon, not a secondary weapon! A second weapon that gave them the confidence that they had in their main primary weapon or even more importantly one which could be carried easily, shoot accurately up to the said engagement range and was deadly at those ranges in a real situation. Soldiers do not need tests inside a lab with no wind effect, shooting at ballistic gel 10 yards away, or shooting at paper targets 25 meters away.

The psychological gains of such a weapon alone are enough to multiply the combat effectiveness of the soldier. To have the option of a 100-meter standoff effective range for a second/backup weapon is a great force and psychological multiplier.
Weapon effectiveness is: accuracy, controllability (size, weight, ergonomics, recoil, follow-up shot) and lethality.

In addition, the cartridge had to fit inside a standard magazine of a large pistol or a slightly modified one and be fired from available pistol designs. It also needed a detachable compact folding stock provided and adapted for its use.

All the required parameters were met except the “available pistol design”. The cartridge was too hot to be fired accurately or safely in any existing pistol design. So in 2012, the FK BRNO team embarked on a new project which was to design a pistol for the 7.5 FK Cartridge, which is basically a short rifle cartridge fired out of a standard sized pistol.

By that time the combat theater was now being exited and the ballistic requirements were no longer needed. However, the preliminary results showed great promise, so the program was continued. From that was born the Field Pistol and the proprietary recoil system that it employs.

Field trials and hunting with the pistol showed a phenomenal ability to create hydrodynamic shock in wild animals of many different species, including stags and sizes up to 360 lbs at ranges up to 130 meters (143 yards). Even hits in non-vital areas rendered the animals immobile or with complete or partial loss of motor ability. Penetration and wound cavities are similar to that of .30 caliber rifle. As is known wild animals are much more resilient than humans and have a very high propensity for the fight or flight reaction. That said, this pistol cartridge combination is not intended for hunting large animals.

Now in addition to the sporting field pistol, a 5-inch barrel combat version which has exactly the same mechanism called the SS short slide, is being employed in a limited way in the war theater with excellent results and success.

The 7.5 cartridge comes with two bullet designs. The 95 grain HP all copper, called “High Terminal Effect” or “HTE”, is designed for defense, hunting, and combat. The 95 grain Spoon Tip all copper bullet, called "Bullnose”, is designed for target shooting. Both are of proprietary design and both versions are also available in brass. The brass bullets are sold exclusively in Europe and not available in the US. Other bullet sizes are available for special purposes upon special order. All bullets are monolithic and are manufactured by CNC machinery to very high tolerances.

The pistol is completely machined from a solid block, using high strength alloy steel the same type as what is used to manufacture field Howitzers. There is no casting or forging. All main and important parts are nitride, and the gun practically has a lifetime warranty except for the wearable parts. The barrel is guaranteed to 20,000 rounds assuming one does not try to cook it. Even if one does, FK BRNO will replace it at no charge.

The gun comes with proprietary patented sights, which are made exclusively for this pistol and grips that come in both aluminum and G10. Holsters are available in a shoulder rotating version, cross draw with a rotating mechanism, inverse small of the back, and an open type holster.

A proprietary folding shoulder stock is available to order in the USA (All NFA rules apply). In Europe, it is supplied standard with the pistol, which greatly increases the accuracy of the shooter who is not proficient with handguns. 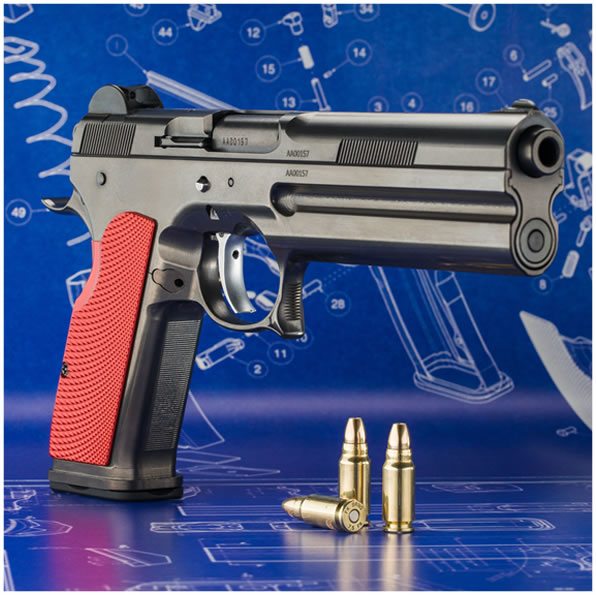 Aside from the obvious intended uses and the various target and sporting uses, the 7.5 FK Field Pistol in both barrel lengths is suitable for use whenever there is a need for longer shooting at ranges (up to 150meters /165 yds.). A rifle is too cumbersome or cannot be carried or used in quick incapacitation of the assailants or target is an absolute must for today’s users. It is especially useful if a folding stock is carried with it on a holster.

Example of uses include, but are not limited to: